How to install pre-receive hooks in GitLab

The code review is a conversational technique to ensure that quality software is being released. It's valuable time that shouldn't be wasted on trying to catch non-compliant commits that could've been rejected on the developer’s computer at commit time.

GitLab server pre-receive hooks in GitLab CE (Community Edition) and GitLab EE (Enterprise Edition) can verify the changes sent to the server. They can guarantee that only those changes arrive to the Git repository that comply with your GitLab Push Rules or other team rules.

Better Commit Policy is a Jira app, popular among developers who also use different other GitLab hooks. The app allows you to set up your custom rules to verify committed changes against. Commit rules can also verify Jira-specific aspects (links to Jira issues, user identity, etc.) on top of formal commit or commit message characteristics.

GitLab and Jira are often used together on a company or team level. Teams use Jira for issue tracking and project management, and GitLab as code repository, version control and CI/CD tool.

Install Better Commit Policy for Jira and see how it can simplify commit verification with GitLab. You will discover that the recently shipped 4.3.0 version brings important new features for the GitLab-Jira integration.

With pre-receive hooks, you can verify a lot more aspects of commits than with GitLab’s Push Rules. Jira specific information or other custom requirement can be included in the verification's scope.

Pre-receive hooks take your commit verification efforts beyond the GitLab Push Rules and allow you to have more control over what changes are accepted to your GitLab repository. The GitLab - Jira integration by Better Commit Policy for Jira is free to try!

How to install GitLab pre-receive hooks

Jira issue keys are often misspelled in commit messages. The good thing is that mistakes are caught at commit time and can’t reach the blessed repository or the reference codebase.

It's an intelligent method of suggesting relevant Jira issue keys if the commit was rejected because of mentioning the wrong issue. The developer doesn’t have to switch context and go back to Jira to check what's the right issue. They get ten suggested issues from the app to choose from: 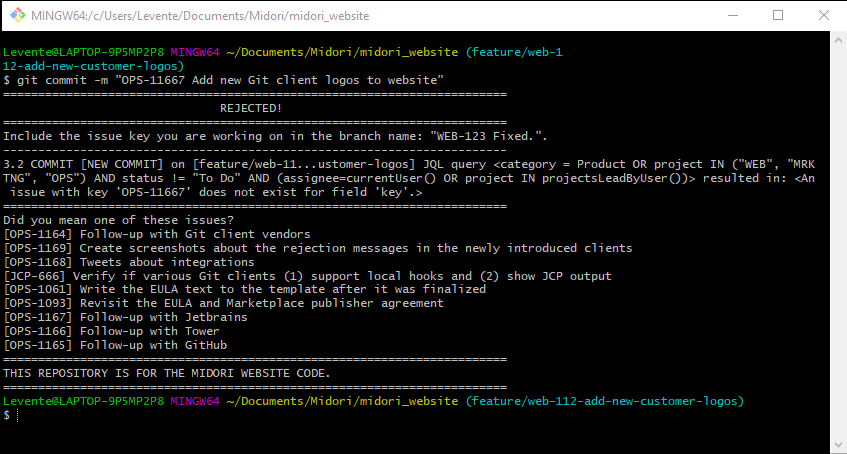